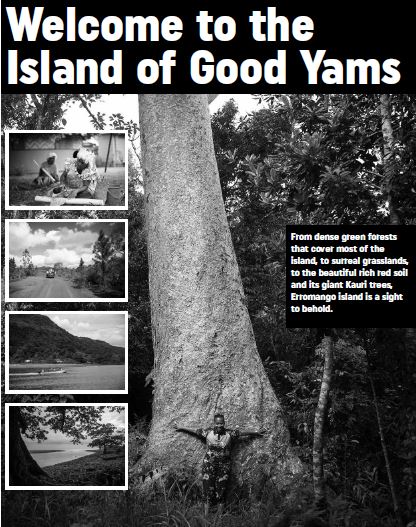 Apart from its breathtaking landscapes,
Erromango has a way of drawing you in making you question why you’ve left this island off your travel bucket list for
so long. A volcanic island known for its mountainous terrain, Vanuatu’s fourth-largest island is filled with a rich but chequered history of early sandalwood exploitation, depopulation, and missionisation. The locals may have so many interesting tales to tell, that you may need to extend your stay! At 891 square kilometers, it’s a little larger than New York City but only has less than 3,000 people living on the
island. Erromango’s name reputedly comes from an encounter that the first European visitor, Captain James Cook
had with a local chief at Potnuma on eastern Erromango. Cook allegedly pointed at the ground, asking the chief what he called his island, but the chief thought he was asking about the yams that were heaped up nearby, and replied, “Aremai ngo” or “those are good yams”. Cook committed this name to his diary, and the name stuck. In Erromango’s Sie language, the only one of six languages that survived sandalwood bloodshed, missionisation, smallpox and blackbirding, Erromango is called Nelocompne.
Erromango is also known for its delicately woven handicrafts and tapa as well as the numerous walking tracks available to the keen bushwalker. The best way to explore Erromango is by foot. There are several possible walking routes that visitors can take to explore the sparsely populated island. The main arrival point of this island, Williams Bay (known until 2009 as Dillons Bay) is a peaceful place where visitors can enjoy a scenic walk along the Williams River. If you’re lucky enough to arrive at the right time of year, you might spot a few whales hanging around in the bay. Turtles and dolphins can also be seen around Erromango when traveling by boat. Unpongkor, one of Erromango’s largest villages is located here and you canchoose to stay in Dillons Bay Yacht Club or Riverside Guest House.

From Unpongkor, you can organize with your host for a guided boat tour to the white and sandy Suvu Beach to explore ancient caves full of ancient hand stencil drawings and see other historical ruins that spans over 2,000 years old. You can visit these ancient caves through the Suvu Skull Tour. Unpongkor holds much historical significance, being the site where the missionary Reverend John Williams met his end in 1839 after a violent encounter between his men and Erromangan warriors. Across the Williams River lies a large stone upon which John Williams was reportedly laid to rest until his bones were collected a year later by fellow missionaries. A brief tour across the river to the traditional sites will provide a pleasant interlude to your visit. From Williams Bay, you can walk across to Potnarvin, a large village in the north east, and then on to Ipota further south along the coast. Although an ambitious walk, it’s possible to walk it in a day if you’re fast, but you might find it more enjoyable to take a couple days with an overnight camp in the middle.
While at Potnarvin, another enjoyable and historical walk of less than 10km north takes you to Potnuma, the site of Cook’s landing in 1774. Along the way, 2,000 year old rock art is etched into the melbi lava rocks telling stories of first contact and the origins of kava. In Ipota, visitors can spend the night at the 3K Guesthouse, located only five minutes from the airport. While in Ipota, you can also visit the big waterfall or make it a whole day tour by adding in a cave visit. An outrigger canoe tour and tour to Ifo village, the site of early human settlement on the island, can also be organized through your host at 3K Guest House. Another interesting and challenging trek is a three to four hour walk from Williams Bay down to South River and across to Ipota through the Kauri Reserve. It’s a bit of a journey, but once you’re there, you’ll be amazed by the magnificent Kauri trees that are over 1,000 years old.

Before you leave, make sure you do the Tapa Tour located near Yorset Lodge in Ipota. It’s an educational tour in which guests can discover the different species of trees used to create tapa, and learn about Navelak, Erromango’s traditional shell money that is made from giant fossilised clam shells. After the tour, you can buy some beautiful and unique handwoven mats or baskets to remind you of your time spent in Erromango.