The 9th Edition Of The Vanuatu DJ Festival Event.

The Vanuatu DJ Festival is back! Save the date for Saturday 19th December and join us at Korman Stadium for this 9th edition.

As in past years, this year we will feature the Sound Tribe Krew, the original artists from the very first DJ festival, as well as other great local talent. Yes, this year, as we all have to adapt to the restrictions imposed on us by the Covid-19 pandemic, the DJ Festival will showcase the best Vanuatu has to offer, as we, sadly, will not be able to host any international artists, but considering what is going on throughout the rest of the world, we are so very thankful that we are still able to party on… So come and join the fun! Doors open at 3:30pm and although this year we will be winding down at 1:00am, we promise to deliver hours full of great music and entertainment.

On the big stage in this new location, DJs will have 30-45minute sessions, which promise to showcase many different styles of music that is sure to keep the party-loving Vanuatu crowd pumped, on their feet and begging for more!

Get all geared up, put on your dancing shoes, leave your valuables at home and be prepared to dance the night away.

Pre-paid tickets are now on sale at only three locations: the Digicel Downtown & Nambatu stores and Burger Station at Tana Russet Plaza. These are limited, so get in quick before they run out. Tickets will also be available on the day, at the gate, unless sold out prior to the event.

It goes without saying that an event of this calibre would not be possible without the precious support of our major sponsors, so a big TANK YU TUMAS to Tusker (VBL), Paradise FM98, Digicel, SPIM, AJC, WAYF Events and Bella Vista Enterprise, and without forgetting all of our smaller sponsors… every little contribution counts towards putting together a successful night! Thank you also to the various Government departments and individuals who have helped with the permits and approvals for this year’s festival.

Be there, or be square!! Let’s all party while we still can!

Lukim yu evriwan at our “home grown” 2020 edition of the Vanuatu DJ Festival.

The 8th Edition Of The Vanuatu DJ Festival Event.

Dj Festival is one of the best music festivals ever in Port Vila. Bringing people from all over the town to enjoy the great sounds of local dj artist and international Dj’s.

We are pleased to announce the eighth edition of the Vanuatu DJ Festival that will take place on Saturday 23rd of November 2019, at the Club Lit and the Ex BP wharf.

The 7th Edition Of The Vanuatu DJ Festival Event.

We are pleased to announce the seventh edition of the Vanuatu DJ Festival that will take place on Saturday 1st of December 2018, at the Club Lit and the Ex BP wharf. For the seven year in a row, the show is featuring the Sound Tribe Krew, the Havamu, groups of DJs from Vanuatu and more local DJ guests and International DJs from Australia, Tahiti, and Solomon Islands.

2018 line up, will consist of over 20 DJs, and for the first time ever, will have its first female DJ. DJ Selena from Sydney Australia. The show will start a 4pm until late of continuous music on to two separate areas one small stage at the Club Lit, and one big stage at the ex BP wharf. Vanuatu’s best DJs and some of the region best DJs will each be taking turns with sessions of 30 to 45 minutes, which promises to showcase many different styles of music, till late, prepare your best or funniest outfit…, leave your valuable at home, because it does not get any crazier than this big party!!!

The 6th Edition Of The Vanuatu DJ Festival Event.

We are pleased to announce the six edition of the Vanuatu DJ Festival that will take place on Saturday 25th of November 2017, at the Lava Lounge and the Ex BP wharf. For the six year in a row, the show is featuring the Sound Tribe Krew, a group of DJs from Vanuatu and more local DJ guests and International DJs from Australia, New Zealand, New Caledonia and Solomon Islands

Vanuatu DJ Festival brings professional DJ’s from around the country and south Pacific, pumping up the speakers from night to dawn for party-goers and anyone who just wants to have a good time. 2017 event showcases the biggest line up of DJs in the region: 28 DJs and 9 contestants.

12PM-5:15PM: Swimming Party (Front of the Lava Lounge only where it will be monitored)
5:15PM Sunset Session
6:00PM: DJ Festival till late

The 5th Edition Of The Vanuatu DJ Festival Event.

Vanuatu DJ Festival event is the only biggest and well organized party of all time. Bringing people from everywhere together to party till dawn! It will be hosted at the Moorings Hotel on the 25th of November 2016. 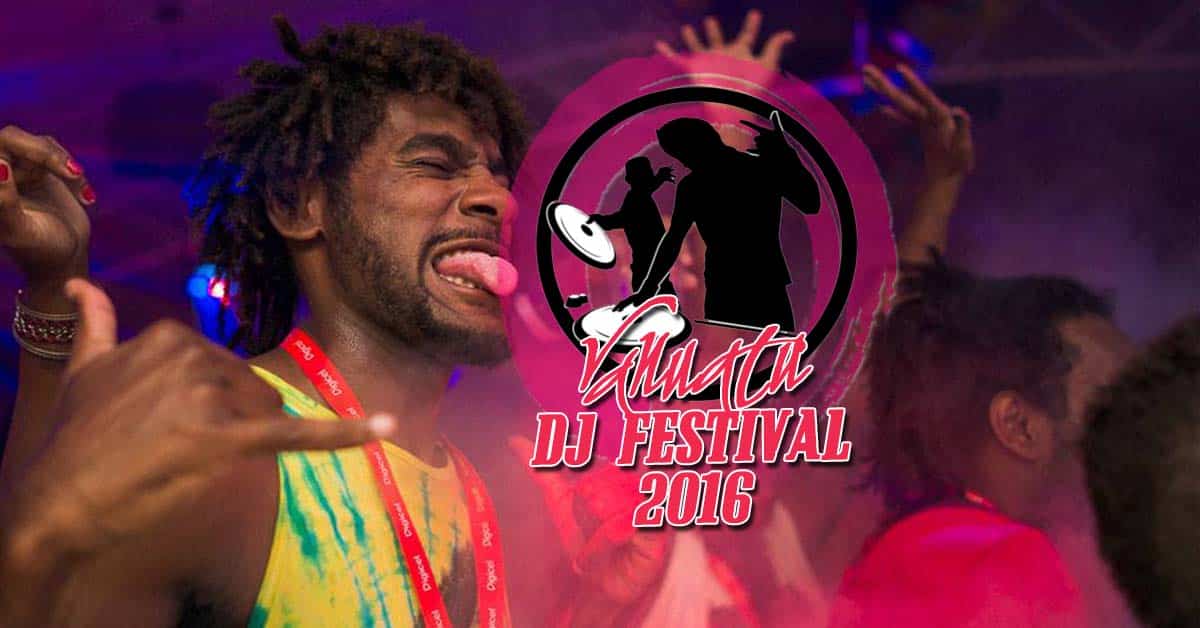 List of DJ and MCs for the VANUATU DJ FESTIVAL 2016:

The  Dj’s produced amazing sounds to bring pumped up party vibes to the environment. Good range of drinks and snacks at the bar with cooperative bartenders. Having to buy vouchers to purchase any drink and food is less time consuming and service was fast. Guards all around the premises did their job ensuring a safe and enjoyable festival for everyone.

The 4th Edition Of The Vanuatu DJ Festival Event.

A landmark in Vanuatu music scene took place last Saturday ! It brought many many many people of all ages and from different walks of life who partied till dawn !!! DJs from Port-Vila and overseas, amazing Moorings Vanuatu location, awesome organisation, everyone will remember that edition.. and be back next year !!! (by Groovy Banana)

The 3th Edition Of The Vanuatu DJ Festival Event.

The third edition of the Vanuatu DJ Festival will take place on Saturday 22nd of November 2014, at the Beef House Restaurant, situated in the ex-Olympic complex. For the third year, the show is featuring the Sound Tribe Krew, a group of DJs from Vanuatu, and guest DJs such as Vanuatu’s most popular reggae DJ, producer and remixer, DJ Zinox. DJ Teiho (winner of the electro category at the DJs Championship in New Caledonia) will make his second appearance at the Vanuatu DJ Festival, as well as DJ Vicky, one of Noumea’s most famous DJs, having held several residencies in the capital’s most popular nightclubs.

This year, there will be12 DJs and 2 MCs. The show will start a 4pm with nine hours of continuous music on two separate floors.

The 2nd Edition Of The Vanuatu DJ Festival Event.

Presented by Nambawan, The Brewery and The Loft is Vanuatu’s biggest ever DJ Festival in Port Vila.  Don’t miss your chance to be part of a phenomenal night at the Nambawan Brewery Complex (opposite The Grand Hotel in town).

That’s 12 hours of non-stop music being played, with 15 DJs – the biggest line up of DJs ever done in the Pacific Islands, playing 32 sessions of 45 minutes, on 2 levels!

The night will start at 2pm on Saturday the 7th of December, and will run for 12 hours until the morning of Sunday 8th of December at 2am.

Guest DJs coming all the way from Paris, Tahiti, Noumea and Amsterdam.